A child somehow enters the enclosure housing a male gorilla at a Cincinnati zoo. Employees shoot the gorilla; the child is rescued. We have all heard the tragic tale of Harambe. Social media is flooded with stories, comments, theories and – OUTRAGE!!!

The sanctimonious tone of many of the stories and comments in this case (and, of course, in dozens of others), sound as if everyone is suddenly an expert on gorilla behavior and zoo protocol.

Oh, and on parenting, where one’s sense of expertise may come even more easily.

How is that child’s mother not in prison, for crying out loud?!?!?!?

“Obviously, losing track of a child doesn’t in itself reflect poorly on anyone’s parenting ability. It’s basically a cliché that children are the world’s greatest escape artists. All of them, little Houdinis, wriggling out of whatever contraption you put them in and just vanishing.

At times like these, our sense of self-righteousness arises and often becomes “The Beast called Outrage.” When we believe that we are right AND that our rightness has a strong, unassailable moral underpinning, we do not hold back; we do not respect the “false opinions” of others. Often, we lose sight of the humanness of others and the distinct possibility that we may not have the whole truth at our disposal. 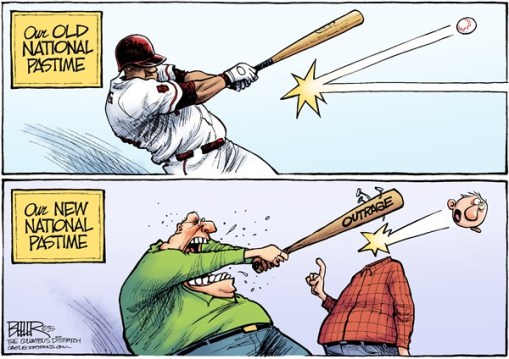 We become addicted to our self-righteousness and sanctimony and to their expression in the form of outrage. We see this in our political opinions – the vilification of anyone who is not our chosen candidate who is the ONLY ONE who can deliver us into the only possible future that we can live with. Those addicted to sanctimony will not compromise because compromising does not deliver the fix, it is a let-down.

“While there are many drawbacks, self-righteousness can also be heady, seductive, and even… well… addictive. Any truly honest person will admit that the state feels good. The pleasure of knowing, with subjective certainty, that you are right and your opponents are deeply, despicably wrong.

Sanctimony, or a sense of righteous outrage, can feel so intense and delicious that many people actively seek to return to it, again and again. Moreover, as Westin et.al. have found, this trait crosses all boundaries of ideology.

Indeed, one could look at our present-day political landscape and argue that a relentless addiction to indignation may be one of the chief drivers of obstinate dogmatism and an inability to negotiate pragmatic solutions to myriad modern problems. It may be the ultimate propellant behind the current ‘culture war.’” ~ Dr. David Brin (LINK) 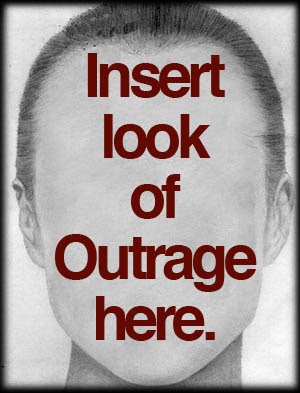 Our politics is one place where those who strategize campaigns have found it to be very effective to get supporters to see themselves as being better than the supporters of their political opponents. They use the media very effectively to build self-righteousness and sanctimony in supporters and to encourage resentment toward and de-humanization of opponents – to show outrage at anything the opponent or their supporters say or do. The evidence shows that they do this all too well – addictions are easy to feed..

I have no doubt that every spiritual leader reading this post has people in their ministry who fit this description, or who are affected by people who do. Often, as a result, the spiritual leader avoids the issues at hand – politics or anything controversial become  forbidden topics from the pulpit or in the classroom. Because how are we do deal with those who jump into outrage in a spiritual setting? Isn’t it better to avoid the outbursts that may infect others and perhaps cause people to leave the community?

So walking on eggshells becomes the norm; avoidance of anything controversial becomes the standard; and fear becomes the most powerful force present in the ministry. How easily it happens!

As in all cases of negative behavior and addiction, this one results from a failure to learn and practice New Thought principles. Someone who does not regularly attend services and classes; who does not have a regular, vibrant and creative practice every day; who allows their mind to dwell on fear based thoughts; who does not pay attention to their thoughts and feelings as they occur and change direction where warranted; such a person is ripe for addiction to self-righteousness and the attending outrage.

So that covers pretty much everyone in the average spiritual community, doesn’t it? Not that all of them, or even a majority will succumb, but there will be at least a few, and they can hijack a ministry.

The answer is to minister to these people, and to the entire community – because all are affected by this – with a determination to teach principle, to promote spiritual practice, and to encourage compassion. This means that transparency is part of the community’s way of being – when there is an issue, it is spoken about in the most loving and supportive way possible, but it is neither avoided nor ignored. Of course, this requires that the spiritual leader take a look at him/herself for signs of such an addiction. We are not immune.

When addictive patterns are present, effective ministry encourages deep personal questioning so that the problem can no longer be denied. This is done best not through confrontation, but by opening to awareness. Only then will someone in an addictive pattern have the possibility of moving toward healing. Grace (radical self-awareness) enters when there is a tiny hole in the wall of denial. Self-righteous sanctimony builds a strong wall against other ideas and opinions, and it must be gently but firmly approached so that the opening for grace can occur. The issue here is the addiction to self-righteousness, not the rightness or wrongness of the position itself.

The idea is to get people to see others, with different views and opinions, as people like themselves. To open to the possibility of seeing beyond dogmatic rhetoric (often gleaned from other sources) to the realization that there is much in common. And ultimately to see that their well-being is not dependent upon any opinion or candidate or political platform or idea about parenting, but on the realization of the spirit within.

This is the essence of New Thought teachings, and when we forget it – and we all do from time to time – it is important that we be reminded. This political season will be challenging enough without spiritual leaders failing to minister to those who are so impacted by the fear and negativity of it all. The idea that at least some of the anger that we see is driven by an addiction is, I think, a compelling reason to act. Our calling is demadning more of us.

“Good blogs aren’t focused on the vapid race for clicks that other forms of social media encourage. Instead, they patiently inform and challenge, using your time with respect.”

AN INTRODUCTION TO SPIRAL DYNAMICS™ ONLINE

Investment: $59 for the Full Course

To register: Go to – http://www.cotterconsulting.net/spiral-dynamics-online